Breaking the World Record of the Largest Display of Piñatas 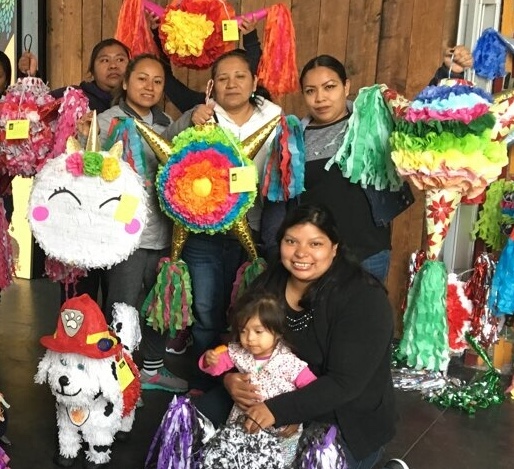 I really love piñatas! They are so colorful and come in so many unique shapes and sizes. They can turn a normal party it into a festive, fun event! Piñatas also bring people together by creating a unified activity in the making, and then the breaking of the piñata, that people of all ages can participate in and enjoy. Our family has broken piñatas at birthday celebrations, baptisms, christmas parties, and even weddings!

Piñatas brought diverse communities together in the state of Virginia at the annual ¿Qué Pasa? Festival put on by the Virginia Hispanic Chamber and Virginia Hispanic Foundation held on and around the Canal Walk in Richmond, Virginia on Saturday, May 5, 2018! The ¿Que Pasa? Festival, founded in 2003, is an annual celebration of the state’s Latino community.
The Virginia Hispanic Foundation made a challenge to break the world record for the largest display of piñatas held by Union de Locatarios Del Mercado Municipal in Mexico, which set the previous record with Guinness World Records, at an event in 2008.

The community jumped to the challenge and piñatas were being made all over the state by diverse community organizations, schools, companies, and families. Piñatas in the shapes and images of Sponge Bob Square Pants, Angry Birds, dinosaurs, cupcakes, unicorns, bulls, donkeys, Rubik’s Cubes, that snowman from Disney’s “Frozen,” and hundreds of others in all shapes and sizes were donated to the effort by people across the state, who hosted piñata-making parties and drives. The piñata challenge was issued as part of an effort to raise money for the Virginia Hispanic Foundation’s Pasaporte a la Education, a bilingual mentoring and leadership program for Hispanic youth created and developed for elementary, middle and high school students. Hispanic students enrolled in the programs increase their attendance by 90 % and improve their grades in two or more subjects. The program helps Hispanic students to stay engaged in school and on track for high education or skill sets certification, decreasing the Hispanic drop out rate.

The end result was 1,013 piñatas were hung up along the canal of Richmond, Va. on May 5th, breaking the world record previously set at 504!! Official piñata judges, former Secretary of Education and George Mason College Professor, Anne Holton, and College Consulting Specialist, Susan Eschenroeder ,counted all 1,013 piñatas as they crowd cheered enthusiastically, realizing the current world record had now been broken!